From MTG Wiki
(Redirected from Balduvians)
Jump to: navigation, search 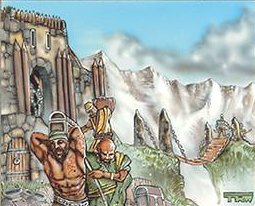 Balduvia was a vast steppe of rocky plains due west of the city of Kjeld that was home to barbarians during the time of the Ice Age on Terisiare (Dominaria). The Balduvian Steppes replaced the former Malpiri Plains.[1]

Balduvian barbarians were mainly hunters, but kept a few more permanent settlements in the area. They were rivals of Kjeldor for some time, but allied with the forces of their enemies to battle against Lim-Dûl. With the end of the Ice Age, many of the beasts that the barbarians hunted died out, and the land became suitable for crops. This marked a change in Balduvian lifestyles and further cemented their alliance with the Kjeldorans. Together they formed the nation of New Argive.