The Azorius Senate is a white/blue guild from the plane and city of Ravnica. Introduced in Dissension, the guild is also featured in Return to Ravnica and Ravnica Allegiance. 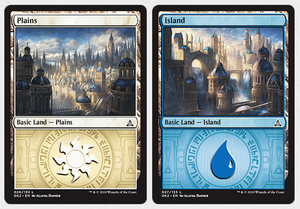 Founded by parun Supreme Judge Azor I, a sphinx lawmage who authored a majority of the original Guildpact,[2] the Azorius Senate functions as the government of Ravnica[1] and creates Ravnican laws.[3]

Believing their legislation to be the singular force that prevents Ravnica from descending into chaos, the Azorius Senate mediates and regulates the activities of all of the other guilds and of the plane despite their numerous decrees being ignored.[1] The Azorius Senate are characterized as being aloof, bureaucratic, excessively formalistic, and fastidious,[4][5] spending hours upon hours with legal documents and ensuring action, if any should occur, stringently adheres to protocol.[6] For such reasons, the Azorius are deeply disdained by Ravnicans, whom the Azorius believe will effect a change and subsequent crime, chaos, and general decline in civic life.[6][7] The Azorius are said to act through inaction.[8]

The Azorius Senate works alongside the Boros Legion and Selesnya Conclave to see to the enforcement of the law, and the Orzhov Syndicate to see to the provision of advocates and lawmages for accusers/claimants/complainants/plaintiffs and defendants.[6] Ultimately, however, the Azorius advocates for blind justice, peace, and the status quo,[7] doing so via their intrinsic involvement in all affairs on Ravnica and with their legions of knights and paladins as well as mages adept in countermagic, magic to disable and hinder those who would break the law, and other law magic.[9]

The rigid hierarchy of the Azorius Senate is reflected in the guild's triangle-shaped crest; most Azorius functionaries report to one superior, and are reported to by two subordinates. The Azorius are divided into three Columns:[5] the Jelenn Column, which makes the laws; the Lyev Column, which enforces the laws; and the Sova Column, which judges the law-breakers.[1][10]

Azorius builders and architects are among the best in the world, and konstructors are those who enhance and/or accelerate their building projects with magic.[5] 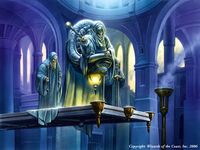 For the majority of the Ravnica block storyline, the Azorius Senate was presided over by human lawmage Grand Arbiter Augustin IV, who was later killed by an explosion during an attack by the spirit of then-Dimir guildmaster Szadek.[11]

The seat of the Azorius’ power in the Ravnica block was Prahv, a monolithic structure of white marble.[6] In Dissension, Prahv was destroyed when the Parhelion, fortress-ship of the Boros angels, collided with it.[6] 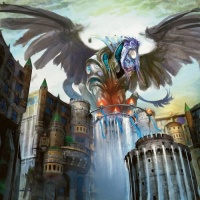 In the absence of the Living Guildpact, the Azorius were uncertain who was supposed to maintain balance among the guilds. As a group, they were convinced that the system couldn't be disrupted, but they were challenged by the reality that the one person who was meant to hold their world together never seemed to be around. The Azorius Senate was invoking emergency powers with increasing frequency, and the Lyev Column's enforcers were wielding an ever-growing amount of influence.[12]

Isperia fell victim to Vraska[13] and was replaced by the planeswalker Dovin Baan. As guildmaster, Baan showed the guild how to make spy thopters and to use precognitive mages to arrest people before crimes would be committed.[12] Verity Circle spells are used to encourage detainees to self-incriminate. Small outposts covered in reflective mirrors, called vez, act as surveillance centers throughout the city.[12] The mages inside can see out and compare their views to those of other vez.

After the fight against the Dreadhorde in the War of the Spark, and the flight of Dovin Baan, Lavinia became acting guildleader.[14]

Head Magic designer and design team member Mark Rosewater said on the blending of White and Blue, "Philosophically, the largest overlap between the two colors stems from a similar motivation. Both colors want to improve the world. White does this in its quest to promote peace, while Blue does it out of its interest in reaching perfection. The end result is the same. Both colors like to force its rules and ways upon all those around them".[15]

Forecast is an activated ability that a player can play only from his or her hand. Only cards from the Azorius guild (white, blue, or white-blue) have forecast. Each forecast card has an ability that can be played once per turn during a player's own upkeep by revealing it from his or her hand and paying a cost, somewhat similar to casting a spell with built-in buyback.[16]

The Forecast mechanic was inspired by the ability on the Unglued card Infernal Spawn of Evil.[17]

Detain is a keyword action that prevents a permanent from attacking, blocking, and/or activating its (activated) abilities until the controller of the detainer's next turn.

Initially, the Return to Ravnica block ability for Azorius was developed around "tap a creature" and the development team termed the ability "jail".[17] Influenced by Arrest, with which the ability shares flavor, of "preventing my opponents from doing things",[18] the "jail" ability was later modified to include preventing activated abilities.[17]

Instants with Addendum have additional or alternative effects if you cast the spell during your main phase.

Species and races associated with the Azorius Senate include:

Classes associated with the Azorius Senate include: