Ashiok is a nightmare planeswalker of unknown gender[1] and origin.

Ashiok has long, slender fingers with long talon-like claws for fingernails. The bottom half of their head is normal—human, but the top half consists of two large black horns, made of some rough rocky substance, framing nothing. There is no upper face, no head, no eyes or nose. There is only black smoke emanating from where the mouth and upper lip ended. This black smoke whirls around their head, swirling down in wider radius outside the body.[2]

Ashiok is centered in black and blue mana.

Ashiok is capable of reaching into the dreams and fears that dwell inside of others. With this power, they can summon beings born of people's darkest fears, call them into reality, and give them form. They become Ashiok's minions, eager to please their master, freed from the dreams of the believer. Ashiok uses these minions to tear down those who view themselves as untouchable and superior, believing that since all sentient beings feel fear, fear is the greatest equalizer of all beings.

Over time, Ashiok's power has taken a physical toll. The mage's face has eroded into a smoky shadow. Nightmarish wisps swirl where a skull may have once been. That these are no longer required is part of their enigma, and are a testament to the unnatural power they wield. The dread-vapors that emanate from Ashiok are an extension of the nightmare magic the mage wields, giving the walker easier access to the fears of those they enshroud. Ashiok now travels the Multiverse in perpetual search of designs for the perfect embodiment of fear.

In this search, Ashiok came to Theros and recognized that the dreams of this plane seem more vibrant than those of the other planes they have traveled to.

Ashiok came to Theros because of the strong power of devotion and belief of the plane's mortals, and of the consequential effects it has on its gods and Nyx. There is something special about Theros, and they intend to harness this unique advantage. However, unlike the gods, Ashiok does not seek to become the object of belief. Instead, they seek the darker side of belief, the smoke, and screams that waft from the cold corners of nightmares. They know that if fond thoughts of the gods have power, then the dark phantasms spawned of fearing those gods hold even more: where there is a belief, there is doubt, and where there is doubt, there is the nightmare. And the world of Theros is a world full of believers.

The nightmare weaver's complete agenda is yet unknown. Whether Ashiok came to Theros for personal purposes, or as an emissary of some stronger force, is unclear. At some point in their pursuits, they made a bargain with Phenax, the god of lies and deceit. The nightmare weaver then sought to incite war between the polis of Iretis and the leonin.

Ashiok possed as Udaen, an advisor to Kedarick, king of Iretis. Kedarick was trying to make peace between his city and the Leonin, resulting in a peace meeting between the two sides.[3] However, Ashiok sent nightmarish abominations to kill off individuals from both sides during the peace meeting. This resulted in continued conflict between humans and leonin, each side accusing the other of betrayal. The leonin retaliated by annihilating the Iretis' citizenry, allowing Phenax's plan to go into motion, to create another necropolis for the Returned, a cog in his grander designs. In return, Ashiok asked to be made invisible to the gods, which made Phenax break into a burst of hysterical, cruel laughter after he peered deep in their essence.[2]

As an experiment, Ashiok used psychic powers to upset the dreams of the citizens of Theros. This created disturbing thoughts of the poleis, which in turn created Cacophony - God of Cities. The newborn god was quickly slain by Ephara, but she was unable to locate the creator of Cacophony. Ashiok was satisfied by the use of Phenax's boon and the results of the nightmare weaver's test. Ashiok valued creation and beauty, and considered the deed beautiful.[4]

Slowly Ashiok's influence grew, nightmares stirring in the minds of Theros's inhabitants. Entire cities grew tense as their dreams turned against them, but it was only the start of their scheme. As the will of the people weakened, those with power, the magic wielders found themselves awakening in places with no memory of how they had gotten there or what they had done while slumbering. They could remember only the nightmares that haunted them, and mayhem broke out in their wake. They were cast out from their homes and all the while, Ashiok gathered power for the grandest spell.

The walker planned to cast a spell over all of Theros that would send the world into never-ending slumber so that they could harvest nightmares forever. There was only one person who could hope to stand against the mage: Dack Fayden. Dack, Ravos and the dead put an end to Ashiok's Sleep curse.[5][6] 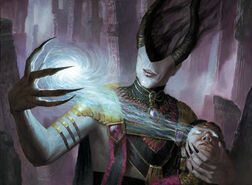 Ashiok was, in some undisclosed way, involved with the War of the Spark.[7][note 1]

Ashiok tortures Elspeth in the Underworld, using her nightmares and fears.

Ashiok continued to spread nightmares through Theros. Not even the Underworld was free from such dark power.[8] Eventually, they would start to particularly savor the twisted dreams of Elspeth Tirel, a fallen planeswalker. Ashiok found out about the nightmarish Phyrexians from Elspeth's mind and then planeswalked away, hoping to find the Phyrexians and to understand more about their nature.[9] 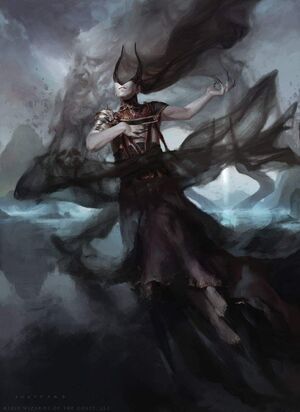