Arena League was a convention and in-store Magic play program launched in 1996 that ended in 2007. 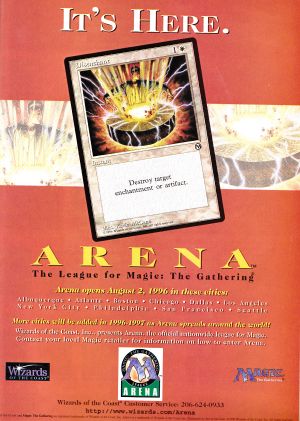 Arena League debuted at Origins on July 4, 1996. The league was introduced to close the gap between casual and professional play, offering a possibility to play competitively in public without the pressure of participation requirements or ranking issues. Arena League tournaments were organized by registered store owners all over the globe. The choice of formats was completely at their disposal to allow casual formats which would attract less competitive players.

In order to increase the attractiveness of joining the league, promotional cards were given out. In 1996, participants received one of five alternate art basic lands randomly at the beginning of each season. The five lands, all illustrated by Tony Roberts, had art that joined together to make one long illustration [1] The best player of a season was additionally given an alternate art Disenchant, the second best player was awarded an alternate art Fireball. These prize cards were given out at the end of each season. Player ranks were determined by a complex ranking system similar to the DCI ranking. Players had to sign up and were assigned a member card with a membership number. All matches had to be reported to Wizards of the Coast by every store where they were analyzed and player ranks were calculated. This system prevailed for six seasons which were given names: Summer 96 starting at the 2nd of August, Harvest 96 starting the 20th of September, Autumn 96 starting the 8th of November, Winter 97 starting the 3rd of January, Tempest 97 starting the 21st of February, and Spring 97 starting the 11th of April. Uncut sheets depicting all cards were awarded to judges helping to organize the events.

Starting with the Radiant 97 season, oversized cards replaced the alternate art cards, but the basics of the prize system did not change. During this period of the Arena League, four seasons spread over the years 1997, 1998, and 1999 were assigned to a special format named Vanguard which needed specially created character cards for play.

With the successful introduction of foil cards into the world of Magic, the prize structure was changed again after the Radiant 99 season. At the end of each season, the two top-ranked players and a randomly chosen player with at least 30 points were rewarded with a promotional foil card. Furthermore, every player who managed to collect 15 or more points during the season received one foil basic land. Points were awarded for winning (2 points) and losing (1 point) matches. Over the years, some of the land cards were reissued. This first era of promotional foil cards ended in disarray in 2002 when a cycle of foil Limited Edition basic lands was aborted midway, already released promo cards were reissued and during the last season starting at October the 14th, Friday Night Magic promo cards Jackal Pup and Quirion Ranger were given out as prize cards instead of Arena League promo cards. 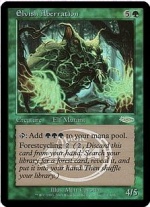 Starting with 2003, the Arena League introduced yet another prize schedule. Seasons were now synchronized with the release of new expert level sets and could be held until the release of the next set. After each season, the 20 players with the most points were rewarded with a randomly chosen alternate art basic land out of a set of five issued for the whole year. Each of the first two sets of promotional lands again connected to form one long, panoramic piece. Players with the 10 topmost scores were awarded with an Arena League foil prize card changing with each season. The two highest ranked players were presented a special Arena League life counter. Points were again collected by winning (2 points) and losing (1 point) matches.

The prize system was slightly altered starting with the special Unhinged Arena League season at the end of 2004. Henceforth, prize cards were given out immediately after a certain requirement ws met. For collecting 8 tick marks, a player was given one randomly chosen non-foil alternate art basic land. For collecting 16 tick marks, he was given a promotional foil card. Further cards could be handed out for additional tick marks at the discretion of the tournament organizer. Tick marks can be collected by winning (you gain 2 tick marks) and by losing (you gain 1 tick mark) a match. Tick mark counters are reset with the beginning of a new season. The Unhinged season was special because alternate art Unhinged cards were given out instead of basic lands and because it partially overlapped with the Champions of Kamigawa season.

For unknown reasons, during the Guildpact season in 2006, two prize cards, Castigate and Wee Dragonauts, were given out instead of one. The exact distribution of these cards was left to the tournament organizer. 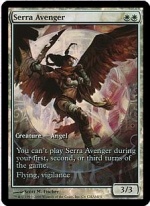