Archenemy is a casual multiplayer format designed for "one vs. many" gameplay. In an Archenemy game, one player takes on the titular role and uses an increased life total and a deck of non-traditional scheme cards to play against a team of variable size.

Scheme cards are exclusively available in products dedicated to the format, including Archenemy and Archenemy: Nicol Bolas.[1]

One player, designated the archenemy, plays against a team of opponents. To even the odds, the archenemy starts the game with 40 life, always takes the first turn, and keeps a second deck of oversized and powerful scheme cards in the command zone. The opposing team takes a simultaneous turn, as in Two-Headed Giant, but each player on that team has a separate life total of 20. Any teammates can block an attacker declared by the archenemy, regardless of which player is being attacked.[2]

The archenemy wins if all other players are eliminated from the game. All of the opposing players, even those who have already left the game, win if the archenemy loses.[3]

At the beginning of each of the archenemy's precombat main phases, they draw the top card of their scheme deck, leaving it face up in the command zone, and "set it [in] motion". Schemes, like emblems, are not permanents. Most schemes have a triggered ability which triggers immediately upon being set in motion. However, schemes with the Ongoing supertype have an additional static ability, as well as triggered abilities which cause them to be "abandoned". Whenever a scheme is "done" (resolved or abandoned), it is placed on the bottom of the scheme deck. The scheme deck is not shuffled after the start of the game.

Archenemy also offers a "Supervillain Rumble" variant. In that variant, each player controls a scheme deck, starts at 40 life, and may attack all other players in a Free-for-All. The starting player is randomly chosen. 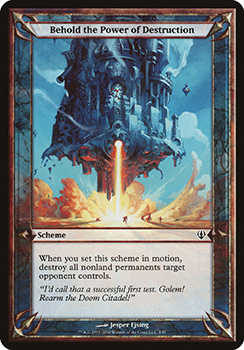 An example of a scheme card.

Archenemy was created, in part, as a response to belief within R&D that the game had begun to focus too heavily on mechanical intricacy and balance, at the expense of "cool" and flavorfully consistent cards and experiences.

The asymmetric teams were inspired by a much older and unpublished product concept named Power Lunch. Power Lunch would have contained cards of a universally high power level, on par with Ancestral Recall, to enable epic battles between two players, or one player with a Power Lunch deck to take on multiple players.[4][5]

Early playtesting for Archenemy (2010) was described as a cross between a Duel Decks and a "solitaire-style multiplayer idea", which involved a Nicol Bolas-themed deck that cast a randomly targeted spell for free each turn. The random nature of the Bolas deck was found to be less interesting than the emotional response that it engendered, of an enraged team of heroes facing a laughing villain. Following that discovery, the design team began working to create scheme cards, while playtesting with any decks available.[6]

"Hot-seat" schemes, which force a single player to choose between two negative outcomes labelled "self" and "others", were created halfway through development. Creative Director Brady Dommermuth was responsible for the over-the-top names of the first schemes, and inspired then-Rules Manager Matt Tabak to select the word "scheme" for the card type. The flavor text on every scheme card in Archenemy (2010) is a first-person quote from the villain's perspective.

We found that the over-the-top villainous feel of these card names was infectious; playtesters in the villain seat were gleefully intoning the placeholder names as they flipped over their scheme cards.

At the end of Archenemy's design period, it used slightly different rules than those made public at release. The earlier draft had the archenemy's starting life proportionate to the number of opponents, rather than fixed at 40, which was changed for simplicity. Also in that draft, schemes were set in motion at the beginning of the upkeep. That was changed to the first main phase to allow the archenemy to make smarter decisions based on the card drawn during the draw step.[8]

Archenemy was created with the expectation that it would be very popular with its intended audience, but that some players would dislike it.[4] Two years after its release, the first Archenemy product ranked behind both Commander and Planechase in terms of popularity.[9]

Archenemy: Nicol Bolas added one new rule to the format, allowing the archenemy's opponents to declare their own creatures as blockers for their teammates.[2] 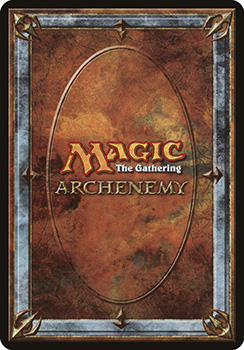 The back of a scheme card.

Archenemy
1. A casual variant in which a team of players faces off against a single opponent strengthened with powerful scheme cards. See rule 904, “Archenemy.”
2. A player in an Archenemy game who is playing with a scheme deck.