Arcades Sabboth was a massive, brightly colored, wise Elder Dragon with pale wings, spawned by the Ur-Dragon. He was the first of the elders to name himself.[1]

Upon being spawned, Arcades lost interest in the other elder dragons being born and went to investigate interesting human structures in the distance.[1] He became fascinated by the human society he found. He took up residence in a ring fort, where the humans worshiped him as their "Dragonlord". In return, he taught them "a better path of life, one ruled not just by their own primitive, violent tendencies."[2] Under the reign of Arcades, their realm dwelt in peace and order.

Even though he had scolded and harangued upon the topic of order and peace and the proper way to rule, Arcades Sabboth threw his might into the Elder Dragon War as he listened to the whispers of Nicol Bolas that brushed through his mind.[3] On the closing stages of the war, Arcades' declining army fought with Bolas on the continent of Jamuraa, their battle interrupted by Ugin's appearance. Arcades tried justifying his attack as reactionary towards Bolas' brutality, but quickly took advantage of Bolas' distraction to stage a strategic retreat.

Sabboth was one of the few victors, along with his brothers Nicol Bolas and Chromium Rhuell, his sister Palladia-Mors and their cousin Vaevictis Asmadi.

Aftermath of the war[edit | edit source]

With Bolas distraught and igniting his spark, Arcades quickly took advantage of his absence to take over the land, welcoming Bolas' abandoned armies. He became the de facto ruler of Dominaria until his death, with Bolas deeming the place not worth retaking the same way Ugin did not deem his empire anything relevant in the greater picture of the Multiverse. However, he did plant seeds of paranoia on Arcades' mind, turning his regime into a dictatorial police state.

He was presumably killed by Kristina, in her duel with Leshrac.[4]

There is a debate among storyline fans about when Arcades Sabboth died. Among the Elder Dragons that survived the War, only Nicol Bolas and Arcades Sabboth were Chromium's brothers. In prerevisionist sources, no other information on these two characters has been ever given, and it was argued that Leshrac would rather summon Bolas than Sabboth. However, in revisionist books, we can learn that Nicol Bolas was alive at the time of the Summit on the Null Moon. Moreover, he is the only known Elder that became a planeswalker, so he could never be summoned by another. Thus, it is presumed that the Elder Dragon summoned by Leshrac and killed by Kristina is indeed Arcades Sabboth. The controversy stems from the conversation held in the conversation pictured on the right. 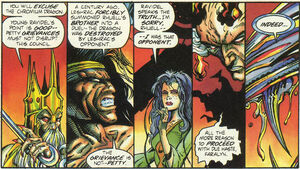