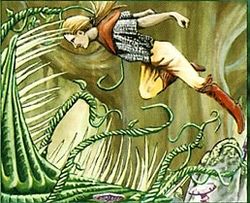 Arboria, also called the Pinelands, is a forested area in the south-west portion of Jamuraa on Dominaria.[1]

It lies above the Great Wall and reaches as far as Buzzard's Bay. The forest is a gloomy place, dim under towering trees rearing straight to a dense interwoven canopy. Pine needles carpet the ground so thickly that even footfalls are muffled. Usually people don't travel through the forest, since it is home to the People of the Pines, a human tribe which hunts and traps and trades with the Buzzard's Bay. Pixies and Fire Sprites are also known to inhabit the area.

Until around 3300 AR, Arboria was stalked by the Akron Legionnaires, who kidnapped the pinefolk to feed them to their master, the vampire Shauku, who resided in a castle in ruin deep in the forest. Another horror known to feed on the unwary traveller of the forest was the Floral Spuzzem, which was in reality one of the first inhabitants of Jamuraa cursed by the Cosmic Horror imprisoned in Shauku's castle. After the intervention of Jedit Ojanen, Adira Strongheart and her Circle of Seven, the vampire's castle was destroyed, ending the menace of the Akron Legionnaires and the Spuzzem, even if Shauku would later resurface.[2]