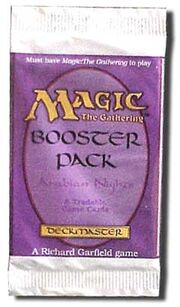 Arabian Nights is the very first Magic expansion and was released in December 1993.[2] It is not considered part of any block.

The Arabian Nights lands have a sand-colored text box, which was reused in Fourth Edition and Chronicles.

Multiple cards in this set use accent marks, or diacritics, in their names. These accents are not printed in the card title because the card title font did not support them, but can be found in the text box. 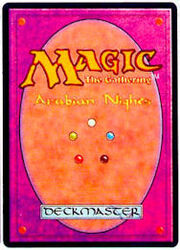 The rejected card back for Arabian Nights

The print run was announced by Wizards to be 5 million cards. Cards were available from late December 1993 until late January 1994. They were sold in booster packs of eight cards which included six commons and two uncommons. Booster boxes contained 60 booster packs.[10] Arabian Nights booster boxes are now extremely rare and cost tens of thousands of dollars. The summer after the release, while The Dark debuted, Arabian Nights booster packs were already selling for five dollars compared to the original price of only $1.50.

As the first Magic expansion, Arabian Nights was originally intended to be released as a stand-alone product. As a result, the set was nearly printed with a yellow-on-pink card back, instead of the blue-on-brown used in all cards known today, in order to distinguish it from "The Gathering", which was originally the name of Alpha.[11] In addition, basic lands were to be included. Although four of them were later removed, a lone Mountain was accidentally left on the common sheet.[4][12]

Note that the proposed new card back appeared on the booster box, indication that it was indeed a last-minute decision to print the set using standard Magic backs.[4][10] In December 2003, an unopened “case” of 10 booster boxes of Arabian Nights was auctioned for $95,000.[13]

The storyline of Arabian Nights was unique in Magic (up to the release of Portal: Three Kingdoms) in being the only set to be based on a real-world setting instead of one of the planes in the Magic multiverse. Inspired by the comic Sandman #50, titled Ramadan, and based on The Book of One Thousand and One Nights, Richard Garfield created the set with not only an Arabian setting, but also added many characters, locations and events that came directly from the novel.[14][15] All of the flavor text for Arabian Nights was created in one night, by Beverly Marshall Saling (the original head editor at WotC).[16]

As a result of the real-world references and stark difference from the world of Dominaria, Arabian Nights was to take place in the plane of Rabiah, which once had been ruled by the Djinni. After the Djinni had weakened themselves in the Spirit War known as The Jihad, humans became the main race of Rabiah. Characters like Aladdin, Ali Baba and King Suleiman had lived long ago. After that the plane was reproduced a thousand times in the Thousand-fold Refraction of Rabiah to keep the 1001 Nights parallel going.

Several stories have been released that took place on Rabiah. Foremost is the story of the planeswalker Taysir, chronicled in the comics released by ARMADA.[17] There were also two short stories; one dealing with the history of the City of Brass, the Brass Men and the planeswalker Fatima,[18] while the other told the origins of the Serendib Efreets, Bird Maidens and Flying Men.[19]

Arabian Nights introduced and broadened several concepts that would have long lasting effects on the design of Magic:[20]

Most of the creature types used in Arabian Nights were new, and many are unique. Early expansions had creature types only for flavor reasons, resulting in many unusual types.

Arabian Nights has no true five-color cycles. There are four Efreet and four Djinn cards, however, with one for each color except White.[22] According to Richard Garfield, efreet and djinni "did not seem to belong in White — while not always evil, they were never good."

Cards from Arabian Nights as compared to cards from earlier sets.

Stone-Throwing Devilshas no generic mana symbols on the card, but light and dark versions can be differentiated by the black mana symbols in the casting cost, which appear either light grey (light version) or pinkish-grey (dark version).

All uncommons in the set have dark version mana symbols.