Amonkhet is an Ancient Egypt-inspired plane overtaken and once ruled by Nicol Bolas.[1]

Liliana believed the plane was created by Nicol Bolas before the Mending, when a planeswalker would still have had the power to do so,[2] though Nissa later discovered that Bolas had instead corrupted a pre-existing plane and warped its culture to worship him instead.[3] Bolas had engineered a world where the inhabitants reach maximum physical perfection before killing one another in the Trials. While the denizens saw this as a righteous path to a glorious afterlife, Bolas's goal was the creation of an army of Zombie warriors known as Eternals, who would be stronger than regular zombies.

The plane is orbited by two suns that shroud the plane in perpetual daylight without actual nights.[4] The second one has slowly been making its path to Bolas's Horn Monument. The people believed that when it appeared between the horn, the God-Pharaoh would reveal himself to them.

Amonkhet's leylines are weaker than other planes, pulsing like the veins of a dying animal. When given the chance to examine the leylines within Naktamun, Nissa describes them as "stunted"; not only are they artificially concentrated behind the Hekma, but the leylines of Naktamun are corrupted by a dark, virulent strain that subtly weaves itself through the leylines.

The most unusual aspect of Amonkhet is that things that die on the plane transform into undead, which is referred to as the Curse of Wandering.[5][6][7] If they are embalmed, they become servile mummies.[8] When no flesh remains on their bones, the Curse of Wandering ends. It is unclear precisely where the Curse comes from; when Nissa makes contact with what remains of Amonkhet's soul in "The Writing on the Wall", it describes the Curse as "its gift". In "The Hour of Revelation", the eight gods are described as seeking to protect Naktamun, as it is "all that remains", and failures of the past are referenced. With Nissa's examination of the leylines, it's possible the Curse of Wandering may be the result of some ancient corruption that predates Bolas, a sickness in the plane itself which seems to be slowly killing it.

Much of Amonkhet is covered in desert and ruins, which are known to the inhabitants as the Broken Lands. The only known settlement was the city of Naktamun, where the gods dwelled among the population and acted as stewards for the God-Pharaoh until his return. The people within the city were divided into several districts that prepared for the trials of the five gods, an elaborate series of tests overseen by viziers. Groups of warriors were referred to as "crops" that prepared to take the trials together.[9] Dissenters against the God-Pharaoh's teachings were either locked into sarcophagi or banished into the Broken Lands.

After the Hour of Revelation revealed that the God-Pharaoh was, in fact, a malevolent dragon and the majority of their way of life a lie, the survivors fled into the desert, leaving the destroyed city behind in order to forge a new destiny. Protected and guided by Hazoret, the only surviving god, these people face an uncertain future.

During the War of the Spark Nicol Bolas sent Tezzeret on Amonkhet to activate the Planar Bridge. After his defeat at the hands of Karn, Samut, Ob Nixilis and Dack Fayden, Hazoret gave them her spear, reassuring Samut about the condition of Amonkhet's population: the goddess and the mortals brought the last two corrupted gods away from Naktamun; they have repopulated the city and created a new Hekma. 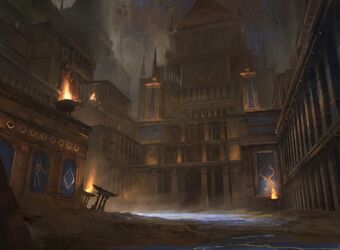 The gods of Amonkhet predate the God-Pharaoh. During his initial assault, Bolas killed every single being old enough to walk, weakening the gods enough for him to overtake them.[10] When Bolas departed Amonkhet, he left behind five gods to steward the plane until his fateful return. Physically exemplary and magically unparalleled, these gods are whom the citizens of Naktamun beseech in their time of need. Unlike the distant gods of Theros, the gods of Amonkhet walk openly among their people. The citizens gladly build monuments to these Gods, as well as to the God-Pharaoh Bolas whose return is prophesied.

Originally, there were eight gods. After Bolas took over the plane, only five remain.[3] The other three were stowed away.[10] Currently, after Bolas's return to the plane, only Hazoret, the god of zeal, as well as the Scarab and Locust God, remain alive.