From MTG Wiki
(Redirected from Allied)
Jump to: navigation, search 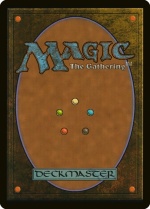 Back of a Magic card, showing the closeness of the Allied colors

Allied colors are two adjacent colors of the color pie:

. A deck may be ally-colored if it uses any of the aforementioned color pairs as its main colors (e.g., Fires). A multicolored card may require mana from both allied colors in order to play it (e.g., Meddling Mage), or it may use hybrid mana of allied colors (e.g., Wild Cantor).

Allied colors tend to naturally complement each other.

White and blue creatures often have flying or some other form of evasion. Some well known creatures include Pride of the Clouds, Isperia the Inscrutable, Iridescent Angel, Plumeveil, and Windreaver. White and blue also offer many great defensive creatures, such as Plumeveil, Wall of Denial, and Ith, High Arcanist.

Blue and black are both known for their removal effects; blue is very good at "bounce" effects (Boomerang) while black is very good at targeted creature destruction (Doom Blade, Terror). Many blue and black instants focus on dealing with one creature at a time very effectively (e.g., Agony Warp, Deny Reality, Essence Vortex).

Not only is blue/black very manipulative flavor-wise, but multiple cards exhibit this pair's tendency to manipulate opponents and take advantage of their cards. Blue/black has access to many counterspells (e.g., Perplex, Countersquall, Undermine) and card advantage (e.g., Dire Undercurrents, Lim-Dûl's Vault).

"Milling", or the process of putting cards from a library into a graveyard, is one of blue/black's strongest suits. Powerful mill effects include Mind Funeral, Glimpse the Unthinkable, Nemesis of Reason, and Oona, Queen of the Fae. This mechanic is usually associated with the Dimir guild, as many iconic milling cards came from sets featuring the guild.

Shadowmage Infiltrator, Dimir Infiltrator, and Ghastlord of Fugue are all very hard to deal with in combat. In addition to being evasive, a handful of creatures copy other creatures. Dimir Doppelganger, Evil Twin, and Cemetery Puca are all powerful cloning effects.

Black and red cards often require the player to sacrifice a resource, usually cards in hand or life, for powerful effects. The Cult of Rakdos from Ravnica block took advantage of self-sacrifice with the keyword Hellbent. Ashenmoor Gouger, Avatar of Discord, Army Ants, Anthem of Rakdos, and Lyzolda, the Blood Witch all exemplify this trait.

Black and red is a very aggressive combination. It has access to some of the best removal and most punishing cards in Magic. Bituminous Blast, Terminate, Rain of Gore, Everlasting Torment, and Demigod of Revenge severely punish opponents.

Green and red make for a very fast deck. They are especially good at building up mana quickly to unleash large creatures. Such acceleration includes Exploding Borders, Frenzied Tilling, and Wild Cantor. Both green and red are particularly good at accelerating on their own, too.

Red and green are particularly effective at destroying artifacts (e.g., Hull Breach, Artifact Mutation, Vithian Renegades). Green complements red in its answers to enchantments, of which red has almost none. Land destruction and board sweeping is also a forte for red and green.

These two colors are great at dealing with flying creatures (Branching Bolt, Deadshot Minotaur) as well as sweeping the board (Firespout).

Green and white exemplify all things of peace and nature.

These allied colors have the most efficient small creatures. Green and white have produced some the best creatures pound-for-pound in the game. Incredibly efficient creatures include: Knight of the Reliquary, Kitchen Finks, Watchwolf, Loxodon Hierarch, Mycoid Shepherd, and Steward of Valeron. Green and white also have very good ways to tutor creatures, e.g., Eladamri's Call, Congregation at Dawn, and Altar of Bone.

White and green are the colors where generation of creature tokens is the most common and efficient. Examples of this include Call of the Conclave, Trostani's Summoner, and Rhys the Redeemed. The two keywords of the Selesnya guild, convoke and populate, both deal with token generation.

Green and white are great at boosting power and toughness, or "pumping", creatures. Notable pumps are Armadillo Cloak, Behemoth Sledge, Knight of New Alara, Sigil Blessing, and Wilt-Leaf Liege. These boosts are crucial to maintaining board presence in the late game, where creatures with power 3 or less normally aren't very relevant.