Alara Reborn contains 145 black-bordered cards (10 mythic rares, 35 rare, 40 uncommon, and 60 commons). It is the first and so far only set in the history of Magic that consists entirely of multicolored cards (much like Legions consisting entirely of creatures).[4][5][6] As such the numbering of the cards is vastly different. Usually a set has all single colored cards alphabetically sorted and grouped together and in

There are no lands or colorless artifacts in the set. The all multicolor gimmick was revealed when Wizards of the Coast showed off a textless Ardent Plea with collector number #1.[7] So far this is the latest expansion or core set which doesn't include any planeswalker cards. The expansion symbol of the set is a representation of the five converged shards.

In Alara Reborn instead cards are ordered alphabetically grouped by their multicolored mana cost as such:

The violent plans orchestrated by Nicol Bolas have reached their cataclysmic zenith, as the five shards of Alara are now merged, with untold power and unspeakable chaos at every turn. In this unpredictable environment, where mythic beings can greatly affect the outcome, mere survival isn’t enough. To live another day, one must battle with unflinching intensity to rise above the madness and master this now grotesquely unified plane. Amidst this overwhelming carnage, can Alara truly said to be reborn? [8] 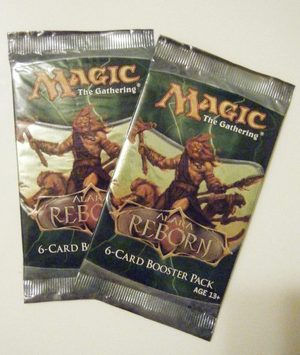 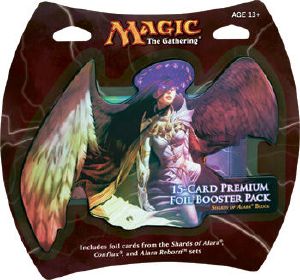 The Alara Reborn tokens are:[14]

From Shards of Alara:

Alara Reborn is the first set in which Hybrid mana appears alongside conventional mana symbols in costs, in this case cards that have one centered color with a hybrid mana symbol of its two allied colors.[15] Though only two colors are required to play these cards, they are always of three colors.

The Cascade mechanic is introduced.[16][17][18] When a spell with Cascade is cast, the player who cast it reveals the top card of his or her library until he finds a non-land card that costs less than the card with Cascade and may play it. If that card has cascade again, this process repeats itself. This mechanic has been regarded as highly powerful and very popular.

Cycling also returned with a twist in the Sojourner cycle: Five creatures that do the same when put into a graveyard from play or when cycled. Some other cards have a cycling cost consisting of Hybrid mana. Landcycling, Exalted, Devour, Unearth, all used previously within the block, return as well.

Most of Alara Reborn's cycles have cards of two or even three different types - sorceries, enchantments and creatures, for example.