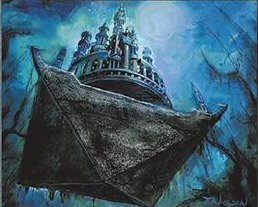 The Pillar Tombs of Aku. Art by Terese Nielsen.

Aku is a floating fortress city in the Uuserk Marshes, built by the mundungu, the alliance of Shadow Guild and Shaper Guild mages from Zhalfir. The city was constructed to hold the pillar tombs of Zhalfirin royalty, preventing them from being desecrated by grave-robbers. Thus, Aku was built in Uuserk, the most inhospitable region of Zhalfir. Its powerful mages and flesh-hungry djinn kept the demons of Kaervek away from it during the war, and were instrumental to his defeat. Kaervek was buried in one of the pillar tombs of Aku.

Aku has been phased out alongside the rest of northwestern Jamuraa since the planeswalker Teferi wanted to spare it from the horrors of the Phyrexian Invasion. It was removed from existence when Jeska destroyed the time rift over Zhalfir.