Fifth Edition (5th Edition) is a core set that was released in March 1997. It is by far the largest version of the Magic: The Gathering core set, surpassing both Fourth Edition and Chronicles. The set contains 449 white-bordered cards (132 rare, 132 uncommon, 165 common, and 20 basic lands).

Fifth Edition contains a total of 429 cards, not including the basic lands, compared to the 363 of Fourth Edition. Of these, only 235 appeared in Fourth Edition. The rest are cards from earlier sets which have been rotated in. The largest rotations come from Ice Age, but they also include cards from Arabian Nights, Antiquities, The Dark, Legends, Fallen Empires and Homelands, as well as a few returnees from Revised that were taken out of Fourth Edition. Fifth Edition is the first core set with cards having new artwork (entirely new artworks for 218 cards). Estimated print run is 800 million.

In designing Fifth Edition, over a hundred of the cards from Fourth Edition were removed. Quite a few of these removals were for game balance reasons. Many spells had long been recognized as being undercosted in comparison to others of similar power. Some of these, such as Strip Mine, Channel, and Mind Twist, were already banned from the Standard tournament environment for being too powerful, so everyone expected them to leave. Others, such as Serra Angel, had been predicted for removal in every revision of the basic set. But some, such as Swords to Plowshares and Lightning Bolt, had been staples of deck construction for so long that most players took them for granted.

Not all the "powerful" cards were removed, however. Several spells were widely predicted to be departing. Armageddon and Wrath of God, for example, were thought by a lot of players to be both overpowered and out of character for white; their retention came as a surprise to many. Similarly, many players expected Black Knight and White Knight would be leaving. Also, some very powerful cards (like Necropotence) were rotated in from earlier sets, causing surprise and (in some cases) uproar among players who thought they wouldn't have to deal with them in the Standard environment any more.[3]

Fifth Edition was the first core set without ante cards. A number of cards which were scorned by players as too weak were also removed, to make additional room for more popular cards. These included the five color-changing "lace" spells, as well as Cyclopean Mummy and Wall of Wood. However, due to the large amount of cards from Fallen Empires and Homelands, which were considered to be weak sets, there still was some dissatisfaction with the Fifth Edition card mix.

Fifth Edition was also the first version of the base set to use the cosmetic changes that were introduced in the Mirage expansion (including a slightly expanded text box and border, more visible power/toughness numbers and reminder text).

From Fifth Edition on, non-monocolor lands started having a bronze colored text box. This was set as a standard, and the color scheme carried on to all subsequent expansions and editions of the game until the Eighth Edition card frame redesign. Previous expansions' land text boxes had featured unique colors for each set or block (e.g., Mirage and Visions).

Fifth Edition was the first set that was advertised as an advanced-level set in the new rating system for the game sets. The developers recognized that parts of the existing rules were far more complex than they needed to be.[4] In fact, they realized that several of the rules seemed to serve more as grist for the rules-lawyering mill than as actual aids to game play. To alleviate this problem, they went through the rules and removed several elements that were either confusing, counterintuitive, or a waste of time. The rule set was not strictly reduced, though. They also added a couple of rules to eliminate some loopholes that only rules lawyers understood (and thus abused) and that were disliked and counter-intuitive. Finally, they introduced and expanded a few game terms.

The above changes were later still deemed insufficient. The Fifth Edition was the last version of the base set to use what are sometimes referred to as the "old rules." The rules were drastically changed in Sixth Edition.[5] 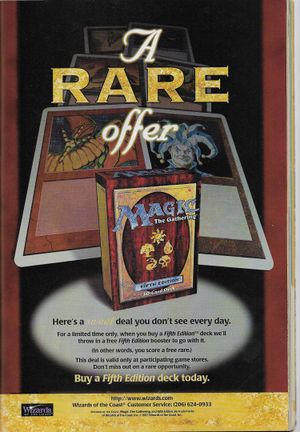 Fifth Edtion cards were sold in 60-card starter decks and 15-card boosters. The boosters featured art from the cards Black Knight, Nightmare, Shivan Dragon, Craw Giant, and Wyluli Wolf. The set was supplemented with a special 2-Player Starter Set. The Fifth Edition 2-Player Starter Set included two 30-card, ready to play decks, an oversized rulebook for easy reference, a play guide to walk you through the first game and one Booster Pack. The Magic: The Gathering Official Strategy Guide was a separate guide to the rules and cards.

Many of the cards received facelifts in the form of new artwork, new flavor text, or both, and the rules text on all the cards was revised for clarity and consistency with the Fifth Edition rules. The cards still have white borders and "copyright 1997" is on the base of the cards. For the flavor text, Wizards bowed to popular demand and included more quotes from classical Earth literature rather than sticking exclusively with the Dominarian sources used in the expansion sets. The flavor text team was headed up by Dominia Continuity coordinator Pete Venters. New pieces were written to replace uninteresting text from earlier sets, or character quotations that were not readibly understandable outside of a particular expansion. In addition, flavor text appeared on cards that lacked flavor text previously.

Changes to the art (for example of the basic lands) were reportedly motivated by by the reluctance of Wizards of the Coast to continue to pay for the use of many arts done for earlier sets, as originally artists were paid royalties for their artwork being used, instead of a flat fee as is done today for new Magic art.[6] The decision to give cards new art created a quandary: should these cards be bordered in black or white?[7] Either choice would upset some players or collectors. The reprint policy had stated that cards from expansions wouldn't be reprinted with black borders, but Wizards had also said that new cards would always be released in a black-bordered, limited edition. They discussed numerous options, that of releasing a limited-edition, black bordered printing of Fifth Edition that would be immediately followed by the unlimited white-bordered printing. Finally, they decided to go with just the white borders on the grounds that new art wasn't the same as new cards.

Simplified Chinese Fifth Edition was printed with a "V" symbol on each card. Simplified Chinese was the only language of the ten in which the set was printed to feature an expansion symbol. It was released in 1998, about halfway between the releases of Fifth and Sixth Edition in English, and the expansion symbols were color-coded for rarity just like they are in all recent sets.[8]