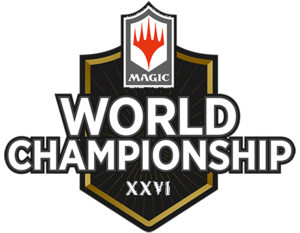 Sixteen players concluded a groundbreaking year for esports and competitive gaming in Magic by vying for $1 million in prizes. Only the best MPL players and Challengers were invited.[3] The championship for the first time was played exclusively on MTG Arena (a decision met by criticism from tabletop players[4]). With $300,000 for first place it featured the largest individual prize in Magic history.[5]

The sixteen slots were spread out across tabletop Magic and MTG Arena qualification paths. They included:

^1 As already-qualified Javier Dominguez won Mythic Championship V, the spot was passed down to the runner-up.

Unlike previous iterations of Worlds, the structure had changed from Swiss pairings into a series of double-elimination brackets. As there were no points to be awarded, this allowed for hard eliminations throughout, two 0-2 players at a time. At the conclusion of Day One, four winning players have advanced to the Top 8 on Day Two while eight more remain in the field to fight for those last four slots in the in Top 8.

At the conclusion of Day Two, four winning players have advanced to the Sunday Top 4 playoff.

Day 1 split the 16 players into two pods of eight for three rounds of draft, then players with two wins sorted into winners brackets and two losses into elimination groups for three rounds of Standard. The standard metagame was the first since the 2016 World Championship to not be a binary format, with a nearly-clean quartered metagame of four Temur Wilderness Reclamation, four Jeskai Fires of Invention, three Azorius Control, and four Mono-Red aggro, with the outlier of Glogowski's Jund Sacrifice.In the elimination group, players were fighting for their tournament lives, with the Top 4 players advancing to the play-in group on Day 2 and the losers being eliminated from the event.[7]

In the elimination group, Sebastian Pozzo and Piotr Glogowski went 2–0 to make the play-in group, while Jean-Emmanuel Depraz and Thoralf Severin won their 1-1 matches against Andrea Mengucci and Ondrej Strasky to keep their tournament hopes alive. Mengucci and Strasky were eliminated with their loses, as were the 0-2 players Matias Leveratto and Javier Dominguez.

In the winners group, players were competing to advance directly to the Top 8 bracket on Day 2. Marico Carvalho went 2–0 to complete an undefeated Day 1 and stamp his ticket in the Top 8, where he was joined by the other 2-0 Standard player Eli Loveman. Manfield, who lost to Carvalho in the 1-0 bracket, went on to defeat Autumn Burchett in the battle of the 1-1 players to advance to the Top 8, as did Paulo Vitor Damo da Rosa, who defeated Gabriel Nassif to advance to the Top 8. Burchett and Nassif still advanced to Day 2 but will be forced to compete in the play-in group for their shot at the Top 8, as will the 0-2 Standard players Chris Kvartek and Raphael Levy.

The middle 8 players were to be halved in the first session of Saturday. In two matches, Glogowski and Severin were eliminated, with Depraz and Pozzo advancing. Nassif lost his third match against Kvartek, and Burchett defeated Levy for the last spot.[8] The upper 4 bracket and bottom 4 bracket played concurrently - Damo da Rosa and Carvalho survived the upper half, Manfield bounced back from a loss to Damo da Rosa, and Nassif was the sole challenger surviving the lower field scrap.

With the unique structure of World Championship XXVI, both Carvalho and Damo da Rosa played seven matches over three days to reach the Grand Finals.[9] The other two players in Sunday's Top 4, Gabriel Nassif and Seth Manfield, played a total of 12 and nine matches, respectively. Carvalho advanced through both Days 1 and 2 undefeated to make it to the Top 4, while Damo da Rosa suffered one loss—to Carvalho on Day 1—on his way to the Top 4. The players met again in the upper bracket finals in the Top 4, where Damo da Rosa came out victorious two games to one to advance to the Grand Finals, knocking Carvalho into the lower bracket finals. Manfield fought his way through the back half of the lower bracket to reach the lower finals and battle Carvalho for the second spot in the Grand Finals. Carvalho emerged victorious two matches to one to set up a rubber match with Damo da Rosa in the Grand Finals. After three intense days of Magic, it all came down to four best-of-three matches to crown a World Champion, with Damo da Rosa coming out victorious.

Since Magic World Championship XXVI actually concluded the 2018–19 Pro Tour Season, there were no Mythic Points to be won.