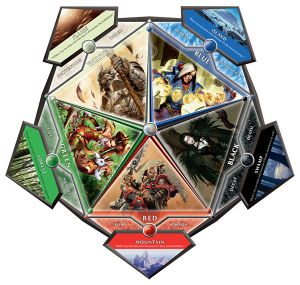 Tenth Edition featured 383 cards (121 rare, 121 uncommon, 121 common, 20 basic lands). It was the first Magic Core Set, after the Limited Edition, to be printed with all black borders.[2] It was also the first time since Fifth Edition that the core set contained substantially more than 350 cards. For the first time, Wizards of the Coast put legendary creatures in a core set:[3] each color received two legendary creatures, and a legendary artifact, Legacy Weapon, was also included. Some of the cards, basic land arts, artists (based on their sketches), flavor texts and the expansion symbol for the set were decided upon through public voting on the Daily MTG website run by Wizards of the Coast.[4] The symbol for Tenth Edition was voted to be the Roman numeral "X." 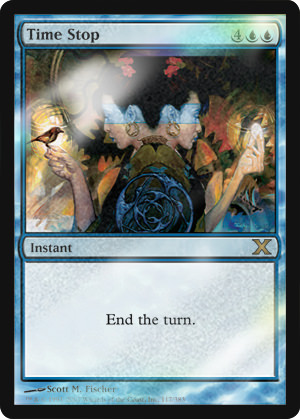 Tenth was sold in 16-card-booster packs (one card being a marketing card), 5 different Theme decks, a fat pack[5] and the Tenth Edition Starter Game, but not in tournament packs. All products except the boosters contained a random Pro Tour Player Card. The boosters featured artwork from Paladin en-Vec, Denizen of the Deep, Lord of the Pit, Shivan Hellkite and Quirion Dryad, each with an appropriate colored background.[6] The set featured randomly inserted premium versions of all cards without reminder text (effectively making it a 508 card set). Many of these foil cards featured flavor text that didn't appear on the nonfoil versions.[7] Others, such as Time Stop, simply centered the text in the text box for added impact. In commemoration of the release of Tenth Edition, the first Game Day was held on July 14, 2007. The release card given out at this event was Reya Dawnbringer.[8]

The Tenth Edition Starter Game came in five different colored packages, but all they all contained the same: two boosters, 20 lands, and a rules sheet and a pro player card. The 20 lands were to be sorted into five piles. After opening the boosters, all white cards from both boosters were to be put on the pile with the Plains; the blue with the Islands; etc. Then choose two piles (i.e. two colors), shuffled them together and played with the 20 or so resulting cards.[10][11] The starter packs included land cards from the upcoming Lorwyn set.[12] 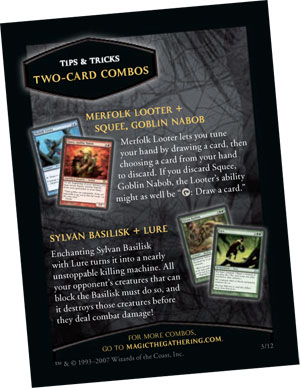 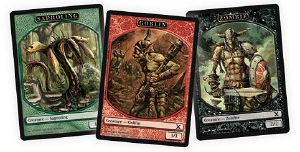 The six tokens in Tenth Edition are:[13]

Tenth Edition was the first set with free sample decks made from 30 commons and uncommons.

Tenth Edition is the first core set to see the following keywords in print:

Of those, Flash, Lifelink, Reach and Shroud were keyworded in the Time Spiral block, while Defender and Double strike had appeared in a number of block expansions, but made it into a core set as keywords for the first time.

In an preamble to the Grand Creature Type Update, the creature types of many cards in the Tenth Edition set were updated to sync them up with the current Race/class model.[14] All artifact creatures and Legendary creatures that previously had none gained a creature type (e.g. Colossus of Sardia, Ascendant Evincar). The most notable change was that all lands and artifacts with abilities that turned themselves into creatures now gained creature types while animated (the manlands and Chimeric Staff). In addition, sixteen creatures had the race "Human" added to their type line (e.g. Icatian Priest) and all creatures in the set that previously appeared with "Lord" in their type lines were no longer Lords (e.g. Lord of the Undead). The Lord creature type was eliminated because it wasn't politically correct and was used haphazardly. Finally, Skyweaver gained the Metathran race, and Nomad Mythmaker gained both the human and the Nomad subtype.

Tenth Edition has 7 cycles and one incomplete cycle.

The preconstructed theme decks are:[22]